So I'm tired of Mary Wigham already :) Plus I just had an itching to work on something new.

I started something that I've been holding on to for a while now. It's a design by a local woman named Renee Greene. She's the in-house designer extraordinaire at Salty Yarns in Ocean City, my closest LNS. When finished, it will be a map of the Delmarva Peninsula. For those of you who aren't familiar, Delmarva is a large peninsula on the East Coast of the US. It is made up of the entire state of Delaware, the Eastern Shore of Maryland, and the Eastern Shore of Virginia. Because it's separated from the rest of the US by the Chesapeake Bay it remains, for the most part, an environmentally protected and rural area - a fact Delmarva-ians are very proud of. 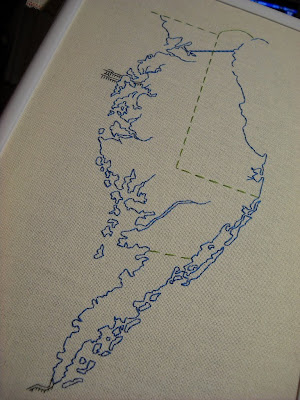 Believe it or not, I actually started this chart on Saturday night. I got a bunch of good stitching time on Sunday too and ended up finishing the outline of the map. It's worked in backstitch so it comes together pretty quickly. Place names, symbols, a map title, and a North arrow remain.

Stay tuned to see Delmarva come to life!
Posted by Kate+IceCream at 2:10 PM

Thanks so much ladies!

i am working on the same pattern now...unfortunaely my copy is an old hand me down that has been written all over...i was wondering where did you purchase this from so i may purchase a new copy.

@Jen, I bought the pattern at Salty Yarns in Ocean City, MD. The woman who designed it works there. I know they have a bunch more in stock.