Now, I'm not the hugest chocolate cake fan but when I saw these Itsy Bitsy Spiderweb Cupcakes online I had to attempt making them. Plus, I needed something to take to book club - we were reading ghost stories... spooooky.

I got the recipe on Delish.com and did one of the modifications mentioned in the recipe. Instead of using the 1/2 cup oil, as called for, I used 1/2 cup pumpkin pie filling. OH MY GOODNESS - so good (I figured the maple syrup would be overkill).

When I tried to make the spider web cake toppers there was a major disaster, not to mention a major mess :) I put the melted chocolate in a zip-loc and cut a tiny little tip off to make a pastry bag... yeah, not so much. I couldn't get a consistent rope of chocolate to come out so I squeezed harder. Eventually chocolate just began oozing out all over the bag. I gave up on the spider webs and just squirted strings of chocolate all over my parchment paper. I put that in the fridge to harden up and when the cupcakes we done just crumbled up the crunchies all over the top. I couldn't let all that beautiful white chocolate go to waste.

So, in the end it worked out. Maybe next time I'll invest in a frosting bag - yikes! 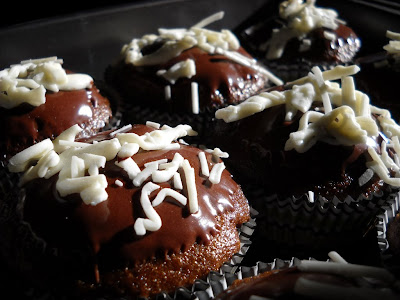 I also got some more stitching done on All You Can Eat - it's not just a phantom mouth anymore :) It's been a long time since I've worked on Aida so it's a nice change not having to count 2 every time I lay down a stitch. 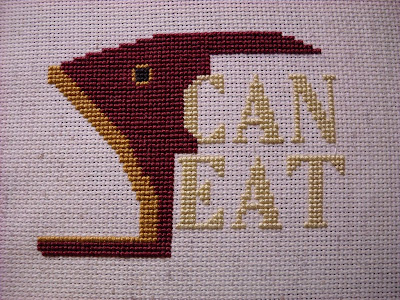 Well, I hope you all had a great weekend. Talk soon!
Posted by Kate+IceCream at 10:47 AM

I bought a mother box of disposible pastry bags, I'll have to send you some! the muffins look great! More sophisticated than the perfect little spider webs would have been anyways...