Apparently there will be no haircuts given on Mondays

Jeremy and I became first-time homeowners a few weeks ago. Hooray for debt! We moved from a rental home in Salisbury to a beautiful old house - late 1800's old - in the small, rural town of East New Market. 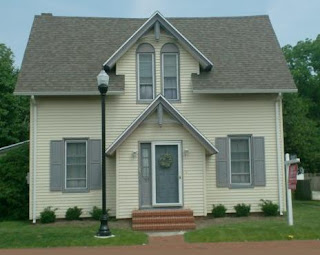 We made an offer back in early May, the offer was accepted a few days later and we were hoping to be in by the end of June. However the sellers weren't ready to move yet - with this horrible housing crisis they figured the house would be on the market at least a few months before it sold. So we set a closing date in late July which gave the sellers plenty of time to find a new place. It also gave us plenty of time to sit, twiddle our fingers, and dream about our house. Any idea how long 3 months is when you're waiting for something huge? So of course Jeremy and I dragged packing out the entire time. We were so busy getting ready for the move that I didn't find time to do much else. My hair was getting angry.

I have what most would call "wild" hair - thank you Mom. It is super thick, super frizzy, and grows like a weed. I like to keep it pretty short so that it actually looks like I have some style. Since the big move my hair has been unmanageable and every girl knows that when you don't like your hair pretty much everything else starts to suck too - from clothes, to "I'm gaining weight", to just a general bad attitude. Yesterday was the breaking point for me. I was going to find someone to cut my hair or I was going to do it myself.

So after work I drive to a little place in Cambridge that I know takes walk-ins. I park the car around the corner and walk over to the door. Locked. Hmmm, it's a week day. Why wouldn't this place be open? Maybe they're not open on Mondays? Well shit. So I get back in the car and figure out my next plan of action. I remember that I saw a hip-looking little place down the street when I was looking in town for houses. So I drive past to see if its open. But I guess the West End swallowed it and spit it back out because all the shades in the windows were drawn and all the lights in the place were turned off. There isn't even a sign anymore. So much for urban renewal. As I'm driving away I figure there has to be some place on Rt 50 to get a stinkin' haircut. I see a sign for a place called Tresses - awesome. I'll get my hair cut there. I pull in the strip mall and head towards the sign except I can't find the door. The business underneath of the "Tresses" sign is a family services office? The stars are against me today. Three places and no luck, I decide to just forget it and drive home.

As I'm driving down the road stewing I remember that there is one last place I can check but I don't want to. If you saw it you'd know why. It looks like a fancy salon that a bleached blonde California grandmother would frequent to get her toenails painted. The parking lot is circular with a large fountain in the middle. There are street lamps along the perimeter. Big, Victorian iron street lights painted white. There is a Hummer and a Cadillac parked outside at all times. And the place is called, wait for it... Sassy Scissors. Ooh la la. So fancy. It may fit in perfectly somewhere on the western shore - maybe even the western coast - but here in Dorchester County it's a little out of place. Did I mention it's completely surrounded by farm fields? To tell you the truth I'm afraid of what I would find in a place like SS - or how much "product" would be in my hair as I walked out the door. Needless to say, I stopped - I was getting desperate. I knew it was another no go as soon as I took the keys out the ignition. There was an open sign on the door, the Hummer and the Caddy were both in the lot but the salon looked like it hadn't been touched in ages. There was a wreath with a big red bow hanging on the door. The lights were out but I could still see a decorated Christmas tree set up in a corner. The place creeped me out. Obviously someone was maintaining the property but who was keeping shop? And why were those cars in the lot when not a soul could be found? I felt like I was being watched so I high-tailed it out of there, threw my hands in the air, and finally went home.

When I got home I told Jeremy all about my stupid quest to get a haircut - and asked if I looked fat (I needed a haircut bad). Jeremy told me to just suck it up and drive to Salisbury where he knew a place that would be open. So I drove to Salisbury, told them to chop it off and they did.

Thank you Supercuts.
Posted by Kate+IceCream at 8:54 AM

I made the appointment!! Wednesday is the big day - 1st haircut since Easter. Thanks for motivating me.

That's so funny! I'm getting my hair cut on Thursday. We can be haircut buddies :)