After much deliberation I decided to use the frames that I had bought a few months ago for the pet silhouettes. Originally I wasn't quite sold - they had the look I was going for but seemed a little large. Turns out oval frames are almost non-existent anymore and anything smaller that I found was too small. Anyway with everything said and done... I love them! And good thing too because boy was it a labor of love getting these things framed up. Phew, baby.

The day starts off taking apart the frames and cutting foam board to the size of the glass. I can't cut a straight, non-jaggedy line with an Exacto to save my life so the boyfriend was recruited. We went through a few "oopsies" before getting 2 ovals cut to the right size. Then I cut my batting, 3 pieces for each (one big, one medium, one small). Next, at the ironing board, I end up burning a portion of the linen around the cat - the iron was set to "linen" and everything! No idea. I was heartbroken. Thankfully when I mocked it up the huge burn was just outside the frame. That was probably my closest call of all time - literally millimeters. With all of that out of the way I started framing the dog, had it all pinned to the foam board, even started cleaning up the back. Then I realized I hadn't signed the piece or written the dog's name on it yet. DOH! After all that was the grand idea - to created portraits of all the family members, even furry ones, that come into our lives over the years. And what's a portrait without a name to go with it? So I, extremely carefully, took everything apart and stitched in dates and names. After that everything was smooth sailing. I guess I learned that no matter how excited you are to get something finished up still take the time to make sure everything is exactly how you want it. 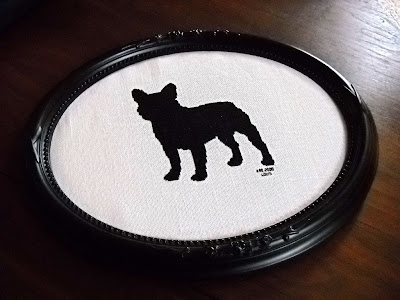 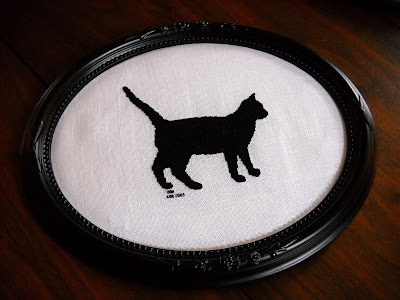 Aside from the framing horror show I've been doing a little work here and there on Primitive Needle's Hallow Sampler. My camera died last week after 7 years of service (RIP, good buddy) so I hadn't taken any update photos. We bought a less-expensive replacement this weekend, a Nikon Coolpix, and I'm back in business! Here's the latest... 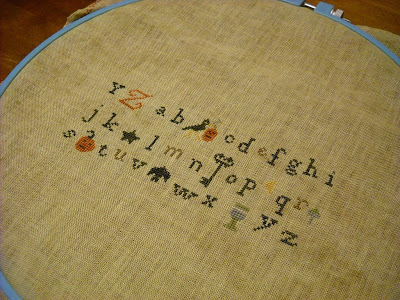 Hope everyone had a great weekend!
Posted by Kate+IceCream at 8:48 AM

Those are SO cute!

How cute! Hope all is well, you haven't had an entry for awhile. :)